Portion control on autopilot means throwing out the scales, rulers, and measuring spoons. There can be no doubt that portion sizes of foods and beverages have increased in parallel to the increasing prevalence of obesity. And the portions sizes keep on growing. Every day there is a new supersized deal out there that makes the supersized meal or beverage from yesterday look small. One would assume that at some point enough is enough. But there is no enough. It is outright scary to realize that all of these ever increasing food and beverage portions can never satisfy our cravings or our hunger.

Take a quiz about changing portion control form the National Institutes of Health.

The only tool we have to counterbalance this situation and to start to gain control over the amount of foods and beverages we consume is portion control. Yet, it has failed over the past 20 years. What is a person trying to lose weight supposed to do? 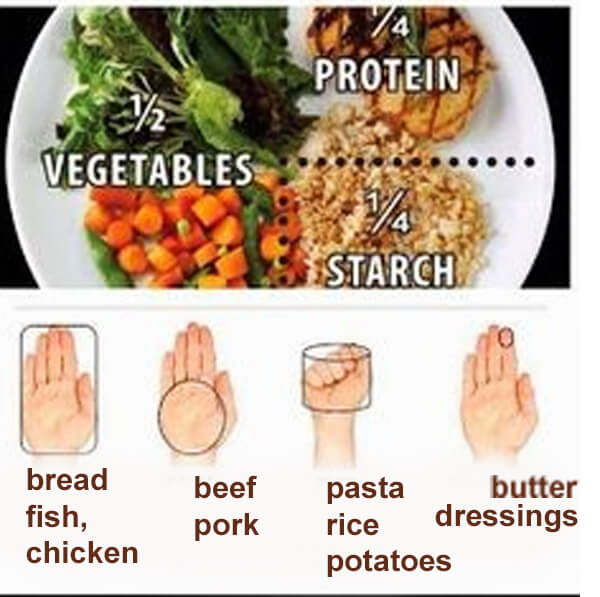 Portion Control is Not Fun

Controlling one’s portions is an often-overlooked problem for many dieters. The subject is neither trendy nor interesting, and is one that most of us try to avoid. After all, if we had the natural ability to control how much we eat of any one food or at a meal, we could eat just about anything.

Portion Control is not about measuring anything
Should we use a tape measure, a scale, a ball, or deck of cards to estimate the right portion sizes? Or alternatively, should we count points or calories from labels and lists? All of these things have been tried and have failed. Even a diabetic, who’s very life depends on getting the size of their portions right, fails more often than not. It’s the rare diabetic who can get it right.

It starts in the supermarket by buying foods and beverages and snacks  that have easy, automatic, built-in portioning. All the menus in my diet plans, including all the shopping lists presented in the last chapter of the guides, are carefully selected for that kind of easy portion control. Protein bars and shakes are great examples of foods with easy portion control.

Avoid foods with no defined portions, such as pasta, rice, and potatoes. Don’t worry about quantity with foods for which controlling the portion is not important, such as salads (not including the dressing!), vegetables, and most fruit fruit.

Don’t confuse controlling your portions with eating less, or in some misguided weight loss attempts, eating nothing. You will only lose weight temporarily unless you learn how to use portion control for maximum benefits and prevent hunger at the same time. Hunger prevention is to the weight loss doctor, what pain management is to the surgeon.

One of the most effective methods for temporary weight loss is gastric bypass surgery. With this surgery, most of your existing stomach gets bypassed and only a very small pouch of stomach is left. This is the ultimate, involuntary portion control. Patients that undergo this surgery do not have to worry about food plans –at least not in the first six to nine month after the surgery.

Whatever they choose to eat, they simply won’t be able to eat enough of it in order to not lose weight. All of them will lose weight, regardless of their level of physical activity or what kind of food they will be eating. Some researchers believe that portion control really is what makes the difference between obese individuals and people of healthy weight. Yet after a year or two, patients regain 1/4 to 1/3 of their starting weight.

Younger people and individuals with with weight problems notoriously underestimate their food intake and overestimate their exercises by 50%. They believe that they eat half of what they do and exercise twice as much. The inability of the so-called “diet resistant” patients to lose weight is clearly a result of this misconception of the amount of one’s physical activity and the real amount food intake. It has nothing to do with any “metabolism or thyroid problem.”

Counting Calories with The Eyes and Not the Stomach

“The amount of food on a plate or bowl increases intake because it influences consumption norms and expectations and it lessens one’s reliance on self-monitoring. It seems people use their eyes to count calories and not their stomachs.”