Qsymia, a combination of phentermine and Topamax is the most effective weight loss pill that is taken orally.  Qsymia by Vivus Pharmaceuticals was the first new diet medication approved by the FDA in 15 years. After many years of frustration, the FDA concluded that most weight loss physicians already knew: it is almost impossible to lose large amounts of weight without some form of medical assistance.  Qsymia is a combination of two older medications, phentermine and topiramate in an extended release form. This medication reduces appetite and produces fullness and early satiety, which results in significantly reduced food consumption. Health care providers have observed that this dual-action produces rapid weight loss that is both safe and extremely effective.

The forces that tell some individuals to eat are so powerful they make “will power” almost useless over the long term. I am not talking about 10 or 15 pounds, but 50-100 lbs. and higher. The signals to eat converge on the appetite centers of the brain from the environment, nervous system, stomach, and even the body’s fat stores. Qsymia by several independent actions diminishes the urge to eat, especially pleasing high carb foods as it produces fullness. Its ideal for chronic weight management.

Qsymia is a Class IV controlled drug and can only be obtained by prescription from a licensed physician. Each physician has to take a training course so he is familiar with the drug and it’s side effects.

I have treated several thousand patients with Qsymia since it’s approval 10 years ago. Patients lose between 2.5 and 3.5 lbs per week over the average of 8 weeks. Many lost more in the beginning. Many who had a large amount of weight to lose took the medication for 8 to 12 months with excellent results.

Side effects were few and did not limit its use. I was able to eliminate most side effects by individualizing dosage according to patient responses. Many patients, especially older individuals, do very well on the starter dose of 3.75mg/23mg. A majority of my patients lose the most weight on the “recommended dose” of 7.5mg/46mg and elect to remain at that dose. I have learned that there is considerable difference in response to the medication from person to person. The most successful weight loss patients are those that take the lowest effective dose.

Qsymia  Dosages come in four dosage strengths: 3.75/23, 7.5/46, 11.25/69 and 15/92. The first number is the phentermine and the second is the topiramate. There are two starter doses and two treatment doses suggested. In adjusting Qsymia dosages, each individual needs to start with the lowest dose and gradually increase the dose until he/she is receiving maximum benefit without side effects. Note there is almost a 5 fold differnce between the lowest and highest doses. This permits the physician to individulize  the dose to get the most theraputic benefit with the least side effects.

Qsymia is the most effective weight loss  medication because its action  is by combining   phentermine’s reduction of appetite  with topiramate’s effect on cravings,  satiety and reduction in impulsive eatging. This allow patients to achieve greater weight loss results. This leads to increased efficacy with lower doses, often leading to fewer side effects. Qsymia advantages comes from synergism.  Synergism  in medication is the combining of two different chemicals, each one affecting the target organ along a different pathway yet producing results greater than the sum of the individual components.

Phentermine has been used for over 60 years as an appetite suppressant. It is the most famous and widely used of all diet medications. Marketed as Adipex, Ionamin and Fastin, it has seen widespread use around the world. Topiramate (Topamax) has been used for a long time as treatment for headaches and seizures. Each drug has a different effect in the brain. Scientists believe catecholamine re-uptake inhibition in the hypothalamus of the brain may result in reduced appetite and thermogenesis (increase in metabolism). Topiramate works by decreasing appetite and increasing satiety in another part of the brain. 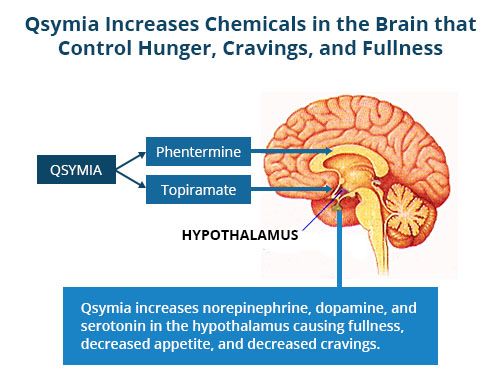 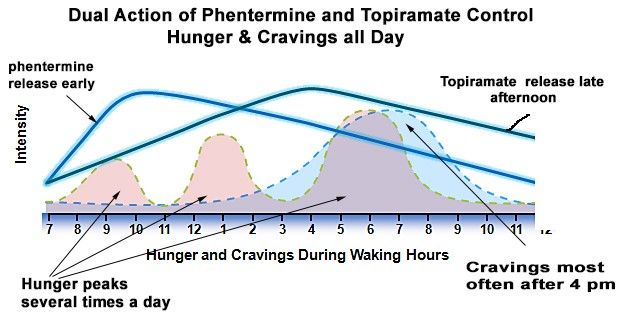 The above graph shows the synergism of the two drugs that make up Qsymia. In the “Dual Action of….” graph above hunger is first controlled by the phentermine early realease in the mornng and by Topirmatate in the evening.

Qsymia results are somewhat surprising for the  large amounts of weight loss. It is especially effective for those with cravings, compulsive eating and large appetites. The feelings of fullness produced by the drug are as important as the significant reduction in appetite. This is a drug approved for long-term use – months and even years! Here are some of the Qsymia results: 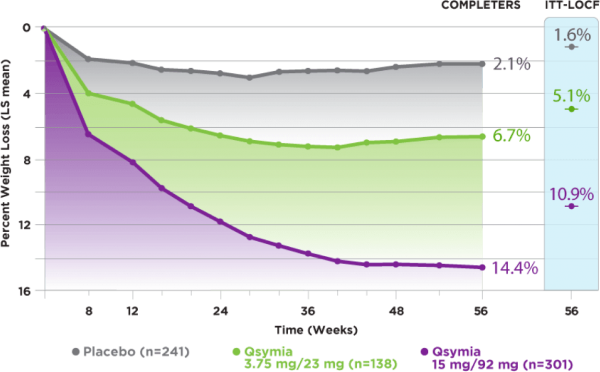 Qsymia Results: Weight Loss in Patients Without Medical Complications-as much as 14.4% weight loss from baseline!

The graph above shows the results of a Qsymia clinical trial. It compares the Qsymia weight loss results over 52 weeks of 680 subjects (that completed the trial) treated with either 3.75mg/23mg capsules, 15mg/92mg capsules, or placebo. Weight loss is expressed as percent change in baseline weight at 52 weeks. 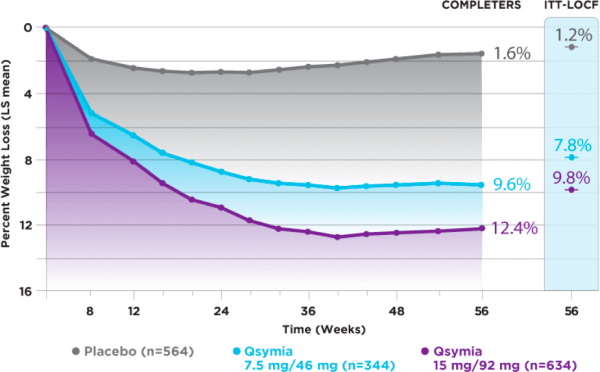 This graph shows the results of a Qsymia clinical trial on subjects with comorbid medical conditions such as hypertension (high blood pressure), hyperlipidemia (high cholesterol), and diabetes. 1,542 subjects participated in the 52-week trial.

Side Effects of Qsymia

Side  effects of Qsymia in patients taking it for up to one year were paraesthesia (tingling or pins-and-needles sensations most often in the hands, feet, or face), dizziness, dysgeusia (distortion of the sense of taste), insomnia, constipation, and dry mouth. This medication can cause a mild (2 bpm) increase in resting heart rate.

Side effects of Qsymia that were more  serious, but less common side effects can include acute angle closure glaucoma, suicidal thoughts or behavior, depression, and anxiety. In some patients, Qsymia can cause cognitive dysfunction (e.g., impairment of concentration/attention, difficulty with memory, and speech or language problems, particularly word-finding difficulties). These side effects of Qsymia are very rare and I have not seen them.

Qsymia costs more than generic phentermine because it’s a new drug. Coupons for price reduction are available on the qsymia.com web site. Distribution by a new pharmacy provider has reduced prices fora month to less than one hundred dollars. Combinations of different dosages also are offered.

Qsymia On-Line
Qsymia can be purchased easily on-line with a prescription. thru the manufacturers web site.

Who Can Take Qsymia?

Qsymia is indicated as an adjutant to a reduced calorie diet. You can qualify for Qsymia therapy with the following BMI’s: 1. 30 kg/m2 without medical problems, or 2. 27 kg/m2 with medical problems. Medical problems include hypertension, diabetes mellitus and hyperlipidemia.

The effect of Qsymia on cardiovascular morbidity and mortality is unknown. it’s safety when used with other weight loss products is also unknown. Do not take Qsymia if you are pregnant, planning to become pregnant, or become pregnant during treatment as it can cause fetal harm.

Qsymia is also contraindicated in breast-feeding, children under 18 years of Age, people with hyperthyroidism, patients taking monoamine oxidase inhibitors (MAOIs) or who have taken MAOIs in the past 14 days, patients hypersensitive to sympathomimetic amines, patients with glaucoma, and people with renal or hepatic Impairment.

The components of the drug have a 25 year proven safety record. After millions of treatment encounters and ongoing safety tests by the drug companies, the FDA is confident about effectiveness and safety of Qsymia. 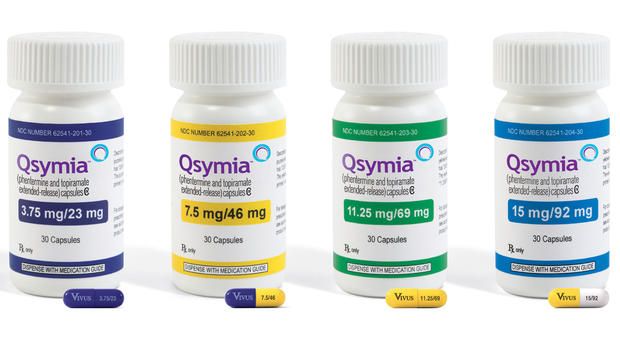 Recommended Dose: On the first day of week 3, you will start the recommended dose, 1 Qsymia 7.5 mg/46 mg capsule each morning.

If you have achieved 3% weight loss or greater, you will normally continue at this dose. After 12 weeks, if weight loss is less than 3% at the recommended dose, we may increase your dosage.

Titration Dose: On the first day of week 13, start taking 1 Qsymia 11.25 mg/69 mg. capsule each day. If we have escalated your dose, you will be on this dose for 2 weeks.

Endocrinologist and weight loss expert Dr. Richard Lipman presents the first book focusing on the FDA approved weight loss drug, Qsymia. Dr. Lipman reviews the clinical trials of Qsymia and answers questions about whether Qsymia is for you; side effects, expected weight loss and how long a patient can take the medication. He presents a simple plan for weight loss that can be successful for you.

Get the Book
Page load link
Go to Top