In a striking study released on April 2, 2009 in the American Journal of Clinical Nutrition researchers from five university centers found that adults can lose more weight cutting out a few sugary drinks than reducing their food. Dr. Benjamin Caballero writes:

This suggests that the participants were able to continue their weight loss beyond the study period simply because they did not return to the high sugar beverages. 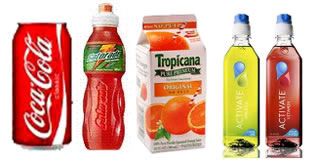 This did not apply to solid foods or other drinks like milk. Of the seven types of beverages studied only sugar sweetened beverages (regular soft drinks, fruit drinks, fruit punch, or high calorie beverages sweetened with sugar) were associated directly with weight loss.

How do sugary drinks contribute so much to weight gain? How do you stop drinking them if you are a “soda addict”?

Sugary drinks contribute an average of 8% to 9% of total calories for children and adults. People in the USA consume about 16% of their daily calories from sugars that are added to all foods. About 47% of those sugars are from sodas and other sugar-sweetened beverages, such as juice drinks and iced tea. On average, people increased their calories from sodas and other sugary drinks by 83 calories a day from 1977 to 2001 as reported in the American Journal of Clinical Nutrition.

About 52 calories were from carbonated non-diet sodas. According to The American Journal of Clinical Nutrition, a 12-ounce soda has 150 calories and 40-50 grams of sugars as high-fructose corn syrup – equal to 10 teaspoons of sugar.

How Do Sugary Drinks Contribute So Much to Weight Gain?

Sugar-sweetened soft drinks contain 140-150 calories per 12-oz serving. If normal dietary intake decreased by an equivalent amount of calories per serving, then weight change would not be expected. However, almost universally the drinks become extra calories. Some studies have shown that if one were to take the same amount of sugar in the from of jelly beans, there was no added calories because food was reduced in proportion.

Sugar in drinks does not cause the same satiety as solid food. Numerous studies have linked more satiety to solid or semi-solid foods than water alone. Dr. Barbara Rolls at Penn State University has done research in this area. She found much more satiety in soups containing protein and vegetables than to an equal amount of broth.

The sugar in these beverages is quickly absorbed through the stomach into the bloodstream and results in rapidly changing blood sugar. Rapidly rising then falling blood sugar is a well-known appetite stimulant.

The consumption of milk

Finally, artificially sweetened soft drinks are being accepted by the obesity research groups:

The fact that the some of the foremost obesity researchers in this country have finally given up their resistance to artificial sweeteners signifies a change in thinking. They recognize what many physicians treating obese patients have known for years–the dangers of sugary drinks, especially soft drinks far exceed any possible untoward effects of artificial sweeteners. Of course water is the best choice. However, the majority of Coke/Pepsi drinkers will not change to water, not matter what you tell them. Switching to coke zero, or from regular sprint to sprite zero is an acceptable choice, a least for now.

Sports Drinks and “Health Drinks” Have a Healthy Aura, But Add Hundreds of Extra Calories

Water is so boring. But call it “Vitamin Water,” make it in beautiful pastel colors, call it “good for you” and “healthy,” add as much sugar as a Coke®, add a whole lot of caffeine, and you have a champion. The problem is most people believe the phony marketing hype and don’t read the label. Additionally, the average American diet supplies the recommended dietary allowance of vitamins and minerals. 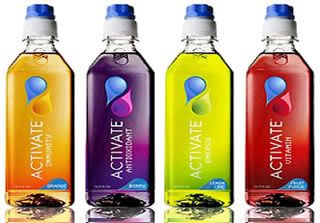 Drinking a single bottle of Gatorade® adds 12 lbs. and 2 inches to your waist over a year. How were we fooled into thinking a bottle of sugar water and a few minerals were good for us? Gatorade has the same sugar content as a Coke, quickly turning to fat around our bellies and making us hungry. For the non athlete, Gatorade® is an absolute disaster.

Sports Drinks, vitamin waters, energy drinks, and exotic fruit or plant drinks have become very popular. There are now over 60 different brands available and counting. Last year Americans spent a billion dollars on such products. But what do these drinks do? Do they really make you healthy or provide vitamins and minerals that you really need? The answer is simple: unless you are ill, working hard in hot weather, or are an athlete, they are absolutely of NO BENEFIT. In fact, they will make you fat. Regular soda and Gatorade® have the same calories.

How Gatorade Started the Whole Thing

Researchers at the University of Florida in 1965 used the school’s football team to test a special beverage they had developed to combat dehydration. The players liked the drink, which they named “Gatorade®” after the University’s mascot. After the Gators defeated Georgia Tech 27-12 in the 1967 Orange Bowl, the losing coach declared to a reporter: “We did not have Gatorade®. That made the difference.” And that was the beginning of the myth that has led to pounds and pounds of weight gain for sedentary individuals.

Sports Drinks are for Athletes NOT Couch Potatoes
Sports drinks are for re-hydration and to replace minerals and sugar lost during high-intensity or long duration exercise — especially if in a hot environment. The three key words here are intense, duration and hot. If you are doing light exercise or doing nothing at all (couch-warming) then Gatorade® is a big waste of money and is full of calories and sugar. Consuming 150 calories and 32 grams of sugar (the same as a can of Coca-Cola®) will easily cancel out 30 minutes of walking. For most typical workouts water is perfectly adequate.

In addition, vitamins E, A, D and K do not dissolve in water. They can only be absorbed with a meal containing fat. So what’s the value of putting them into a bottle of water? To taste good, manufacturers add 32 grams of sugar. One of the issues is fooling yourself into thinking that drinking 32 grams of sugar is “healthy.”

What is actually in a 125 calorie bottle of Vitamin Water besides the sugar?

Sodium, protein and fat are zero, as is Potassium in all but one variety. Vitamin content shows Vitamin C at 100% RDV or more, Vitamin B3 is 100% or 0 depending on the variety, Vitamin B6: 100%, Vitamin B12: 100% and Vitamin B5: 100%. One variety contains 50mg of caffeine. Another variety contains 25mg of the amino acid Taurine. Others contain Guarana (caffeine source from a plant) Ginseng (herb, believed to cleanse, provide energy, and ward off illness), Ginko Biloba (from a tree, believed to enhance cognitive function), and various antioxidants and amino acids with perceived health benefits. Have a look at their full nutrition information and ingredients here.

The same vitamins and minerals can be found individually or combined in any over the counter multivitamin tablet–without all the sugar. The amino acids L-Carnitine and Taurine are natural products made in the body. There is no need to add extra amounts, and there is NO proof they have any weight loss benefit. The plant products Guarana, Ginko Biloba and Ginseng have NO proven medical benefits.

A cup of coffee has 120 mg of caffeine and the average can of cola has 41 mg of caffeine. Caffeine does produce alertness, but at the same time it may cause dehydration, heart rate and blood pressure elevation as well as insomnia, headaches and anxiety. A lot of people experience significant side effects above 200mg. That equals about 2 cups of coffee or 4 cans of cola.

The issue again, like the sports drinks, is not to be fooled by the “healthy” marketing that surrounds these drinks.