Phentermine: Safe and Effective for More than 65 Years!

Adipex, the brand form of Phentermine has been prescribed for initial weight loss and weight control successfully for more than 50 years in the United States. In fact, Adipex and phentermine are the most prescribed medications used for weight control. Recent data from 2016 show that it’s the 226th most commonly prescribed medication with over 4 million prescriptions filled per year.  It’s mechanism of action is thought due to appetite suppression through norepinephrine release and to a lesser extent through dopamine and serotonin release.

Phentermine: Often Maligned Because It Has Similar Chemical  Structure and Side effects of the Amphetamines

Often maligned inappropriately because it’s two dimensional structure resembles amphetamine and because of similar side effects it remains the safest and most effective medication available for the long term treatment of obesity. It is far safer than the disease it is used to treat. Almost all the controversy surrounding phentermine was (and still is for some individuals) surrounds safety and effectiveness. It has been safe to use both in the office and on-line.  On-line prescribing phentermine has helped hundreds of patients unable to get the medication locally. 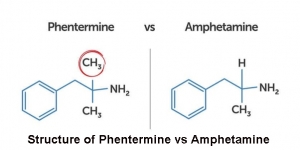 It has been in active use since it’s initial approval by the FDA in 1959. The first re-evaluation was in 1973 when the FDA evaluated all drugs for not only safety but effectiveness. It passed all the tests.  The first long term study was released in 1968.  It reported on  108 obese women treated for more than 8 months.  An average weight loss of 13% was found on phentermine  and the only side effects noted were dry mouth, insomnia, and constipation all which proved unimportant.  https://www.ncbi.nlm.nih.gov/pubmed/4969672,   https://www.ncbi.nlm.nih.gov/pubmed/4889477

Note how closely the phentermine and amphetamine molecules appear. Only a slight change. Yet both drugs have different actions. A few of the side effects are similar but they act quite differently.

Fifty Years of Studies of Phentermine:  Safety and Effective

Unlike most medications, phentermine has been re-evaluated on more than four occasions over the next 50 years!  The first and most extensive re-evaluated by the FDA occurred during the phen/fen crisis of 1997. After several years and evaluation of thousands of patients across the country, phentermine was found  both safe and effective. The occurrence of pulmonary hypertension and valvular heart disease was found to be due to the serotonin drug fenfluramine part of the phen/fen combination which was then taken off the market. Since that time there has been no reports linking pulmonary hypertension and valvular heart disease with any anorectic medication. This re-evaluation cleared up the issue of phentermine effectiveness and safety. 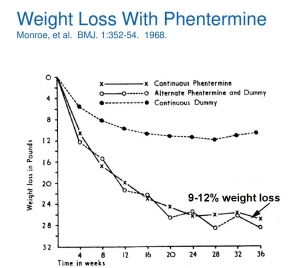 Phentermine in Combination: The Most Extensive Evaluation of Any Weight Loss Medication in 2010-2019

The FDA re-evaluated the side effects effectiveness for long term obesity treatment when it approved a new medication Qsymia – a combination of various doses of phentermine and topiramate. The FDA reviewed the results of 4500 obese people treated with different dose combinations of the two medications for 12 to 36 months. Again it was found safe and effective with a 9 to 12% weight loss. To ensure safety, the FDA required a separate study of possible cardio-vascular side effects:  twelve hundred obese patients  followed to examine the occurrence of any cardiovascular complications including changes in blood pressure, heart rate and Cardiac ECHO’s. No abnormalities were found. There was no elevation in blood pressure, contrary to popular opinion. This has been the experience of nearly all physicians treating obese people, even those with concurrent hypertension. The most recent report of long term safety of phentermine was released in 2019. It consisted of a  multiple studies over many years and stressed safety with long term use and for maintenance of weight loss. 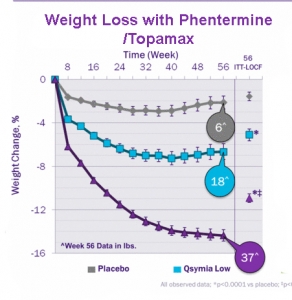 Most recent FDA evaluation occurred in 2016 when the FDA approved phentermine hydrochloride  in an 8 mg, a low-dose medication for adults with obesity that is taken up to three times daily. This was named Lomaria.  This new dosage form involved a short acting medication that is taken before meals or whenever the patient is hungry and up until 4 hours before sleep. It fills in the gap between the long acting 12 hour effect of the  37.5mg extended release phentermine.https://www.healio.com › endocrinology › obesity › news › online › fda-app…

Despite the global epidemic of obesity only a handful of drugs have been developed and approved by the FDA in the past 30 years and 2 have been taken off the market. This compares to more than 700 drugs approved for diabetes, heart disease and neurologic disease! The difficulty has been not only the many causes of obesity, the high re-occurrence after weight loss as well as the need for safe medications that can be used for a very long time. Since only two medications are effective for long term use– orlistat and phentermine, many studies have been done to establish the effectiveness and safety of these medications. Phentermine is the most effective – phentermine.   Three  studies of phentermine offer the most information:

2002 – Dr. C.K. Haddock: Dr. Haddock reported on 108 clinical trials of anorectic agents from 1976 through 2002. The study included short and long term results and follow- up. He found that  43% of phentermine treated patients maintained at least 80% of their initial weight loss compared to 15% of placebo-treated patients.

2018 –  The Pennington Biomedical Center reported in Clinical Chemistry in 2018. The authors reported results from multiple centers across the US covering all 9 medications. The best results were the 6% weight loss above the placebo for phentermine. They reported no evidence of significant side effects, especially hypertension, and cardiovascular disease.

2019 review of 13, 972  Phentermine Users: The most robust review to date of phentermine was reported by Dr. Khristina Lewis team that analyzed 13, 972 adults in the Journal Obesity treated  with phentermine for up to three years.  “In general, the longer patients were on the medicine the more weight loss they had,” Lewis said. “Not surprisingly, when patients stopped taking the medicine weight to regain was common.”  Dr. Lewis found long-term use was not associated with increases in blood pressure or increased risk of heart attack, stroke or death but was associated with significant and progressive weight loss across almost all users.