Belviq is a new weight loss pill. It’s the second approved by the FDA in over 20 years and the first truly new medication. It increases serotonin in the brain to reduce appetite and cravings.

My experience with Belviq has been remarkable. It has almost no side effects and one can even take it at bedtime. It acts more like an anti-depressant than the typical “diet pill.” There is NO mental stimulation, racing heartbeat, or palpitations. The effect is more on fullness than appetite. It has proven to be useful in diabetics, older people, and people with cardiovascular disease because of the lack of side effects and interactions.

I recently completed 12 months of treatment of 20 patients with Belviq. Although this was not a controlled study, the weight loss was impressive:

Side effects of Belviq reported:

How Does Belviq Work?

Belviq is a weight loss drug that belongs to the serotonergic class of drugs. The term “serotonergic” refers to medications whose mechanism of action is to increase serotonin levels in the brain. Serotonin is a neurotransmitter found all over the body.

Neurotransmitters are the body’s chemical messengers. They send messages between neurons of from neurons to other structures in the body, such as organs and muscles. The body sends messages (nerve impulses) from one nerve to another across small spaces between nerves called synapses. Since these electrical impulses are not able to make it across the gap, the body converts them into chemical impulses. Neurotransmitters such as serotonin carry these chemical impulses across the synapse. Serotonin acts on the brain centers involving sleep, sex, feelings of well being and overall mood, appetite, cravings, and much more. Once the serotonin has done its job, the nerve cell from which it came reabsorbs it.

Everyone in the U.S….. has experienced high serotonin effects after a large turkey dinner. One feels sleepy, happy, well fed, and calm. All of these feelings are due to the high serotonin levels produced as a result of eating the turkey. Turkey is loaded with a chemical called tryptophan, which is necessary for the production of serotonin. Eating turkey and other foods high in tryptophan increases serotonin concentrations in the brain. This produces calmness and fullness.

Researchers from around the world over the past 30 years have recognized the unique properties of serotonin to induce not only calmness but to reduce depression, anxiety, and compulsive behavior. Only recently have they found drugs like Belviq that harness this action to reduce appetite and cravings.

Belviq Increases Serotonin in the Brain to Reduce Appetite & Cravings

Most people are familiar with a group of serotonergic drugs called SSRIs (selective serotonin reuptake inhibitors). SSRI’s were developed to treat depression, anxiety, and obsessive-compulsive disorder. These drugs work by keeping more serotonin in the brain cells by blocking its re-uptake by the cells that first produced it. This ends up enhancing the desired effect of the serotonin. Prozac, a typical SSRI, acts by blocking the pump that sends serotonin back into the cell. More serotonin remains in the synapse, ensuring better transmission of nerve impulses. SSRIs are called selective because they seem to primarily affect serotonin and no other neurotransmitters.

Belviq is more targeted. It reduces hunger and cravings by altering specifically the 5-HT2C serotonin receptors found on the brain cells in the hypothalamic appetite centers. Overweight individuals lose weight by reducing their hunger and desire to eat. 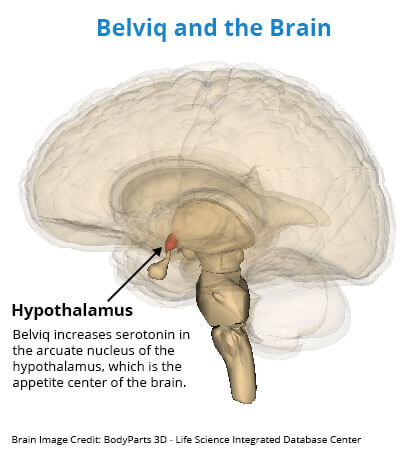 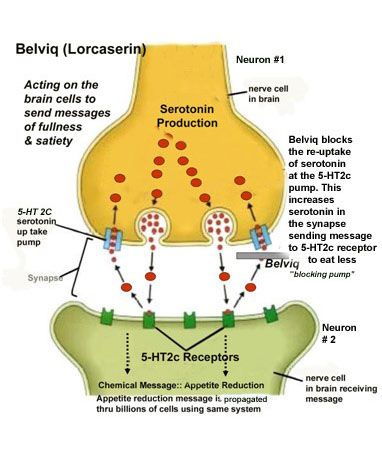 Since Belviq is far more selective than fenfluramine, none of the destructive heart issues have been noticed in clinical tests. This is exceptionally good news for overweight and obese patients who have waited 20 years for a safe, effective weight loss medication. Just as new prescription drugs for depression have changed the face of psychiatry, so too will new anti-obesity medications change the way the medical profession treats overweight individuals.

How Effective is Belviq?

According to clinical trial data submitted by Arena to the FDA, nearly 50% of dieters without Type 2 diabetes who used the medication lost at least 5% of their starting weight — or an average of 12 lbs. — over a year, compared with 23% of those taking a placebo. For best results, doctors advise dieters to use the medication together with a healthy diet and exercise program, like the Miami Diet Plan.

What are the Side Effects of Belviq?

While technically classified as an SSRI (like Prozac), Belviq’s mechanism of action is more specific. Therefore, while some of the same side effects and warnings are present, we have seen lower rates of occurrence.

The most common side effects of Belviq in non-diabetic patients are headache, dizziness, fatigue, nausea, dry mouth and constipation. These side effects occurred in 6% or fewer patients and most disappeared after a few days. Only 6% of subjects pulled out of the Belviq studies because of side effects. In patients with diabetes, side effects include low blood sugar, headache, back pain, cough and fatigue.

Who can take Belviq?

The FDA has approved this medication for people who are obese (with a body mass index, or BMI, of 30 or higher) or who are overweight (with a BMI of 27 or above) and also have at least one weight-related health condition such as type 2 diabetes, hypertension, and high blood lipids and cholesterol.

Who should NOT take Belviq? 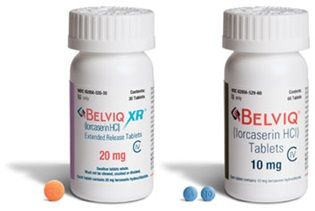 Belviq XR: One 20 mg Pill Once Per Day

Get the Book
Go to Top