Maintaining Weight after Diet: Secrets You Need to Know

Maintaining Weight loss after a diet is the most significant challenge facing all dieters today. The outdated concept that “eating healthy” and “exercise” are the keys to weight maintenance following a weight loss plan may sound good, but sadly not very successful. 90% of dieters who lose 20 lbs. over a year will regain the weight in the following 24  months. In fact, it takes multiple attempts at weight loss even to lose the 20 lbs. in the first place.

What is Successful Weight Loss?

Successful weight loss is keeping at least 10% of your body weight off for at least one year. This definition differs from the FDA’s statement, which states that an effective weight loss drug only has to produce a 5% loss. Many researchers find that only 10-20% of overweight individuals are able to obtain the goal of “successful weight loss”. This occurs no matter what diet or exercise plan is employed.

Regaining weight after weight loss is seen in the figure below adapted from Sumithran, P et al from the New England Journal Of Medicine (2011:365:1597-1604). It shows the slow increase of weight following 10 weeks of diet and weight loss despite eating calories calculated for weight maintenance. 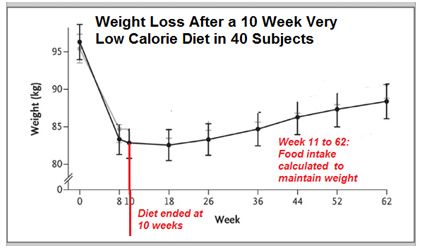 Reduction in Metabolism and Increased Hunger:  Main Determinants of Weight Regain after Dieting

Maintaining Weight loss after a diet is more difficult in families with a high degree of obesity. In most adults, body weight is constant over long periods of time despite changes in both food intake and exercise. This suggests that our body weight is controlled by many factors beyond most people’s control. This makes maintaining weight loss challenging. Despite eating more than 1 million calories a year, the balance of calories in and out varies no more than 1% over the year. The control mechanisms for body weight that regulate our ability to lose and even more important maintain our weight are based on inherited factors based down from past generations as well as environment influences. All of these converge in a family where both parents and several children are overweight.

Most individuals who have lost weight and only to regain it know it’s easier to lose weight than to keep it off. Why is this so difficult? it’s due to the fact that as one loses weight there is a decrease in metabolism and energy expenditures to values below what one might suspect from the actual weight.

Part of this is due to the reduction in muscle mass seen with weight loss. This is also the explanation for the weight gain with aging. Everyone loses muscle and bone mass as they age. This is one of the causes of plateaus in all weight loss programs. However, this metabolism reduction is still not enough to explain the easy and quick weight regain often to levels about the starting weight as well as the reason for weight loss plateaus after losing 15-20 lbs.

Reduced metabolism that characterizes plateaus and weight maintenance is accompanied by increase hunger. Fullness is often hard to achieve after weight loss. People tell me all day how hungry they are after they have attained their weight loss goals. Other issues contributing to weight loss plateaus include gradual weight regain after a weight loss programs and the fact that calories burned with any movement are very dependent on body weight.

Here are the reasons for weight loss plateaus and the difficulty maintaining weight loss after a diet plan:

The reason why 90% of dieters regain their weight within a year is not the result of a lack of willpower, but the fact that hunger is increased during and after weight loss. These changes continue for several years after, during which time the body tries to regain it’s lost weight. Studies have shown that this is due to a rise in the levels the hormones and chemicals causing hunger including Grehlin, and gastric inhibitor polypeptide.

The graph below clearly illustrates the changes in hunger perception during and after weight loss found in the studies of Dr. Sumithran and colleagues. They evaluated hunger before and during a weight loss program and during the maintenance phase by providing a standardized meal and measuring the degree of hunger reported by the subjects over the following six hours.

In the graph, the solid black dots illustrate the hunger patterns for four hours after eating a standard meal before the weight loss. Hunger starts off at 32, drops 30 minutes after eating to almost zero, then gradually increases over the next 120 to 240 minutes, ultimately reaching levels experienced before the meal.

Increased Hunger Persists for More than a Year After Weight Loss 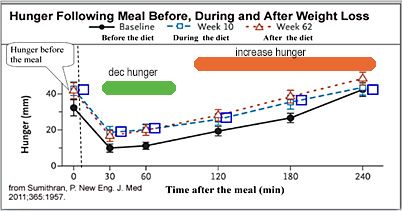 For subjects on their 10th week of the diet, the clear boxes show increased hunger before the meal (as would be expected) which persisted for four hours after the meal. The triangles show an increased hunger pattern before and after a meal when the subject returned to “normal eating” a year after the weight loss. These values are similar to the hunger patterns seen during the dietary phase.

This pattern of increased hunger after completing a weight loss program may be one of the reasons for the common difficulty of maintaining weight loss after most diets, as well as the need for continued treatment after the initial weight loss—either surgical or with medication.

6 Secrets to Maintain Weight Loss After a Diet

Regaining weight after a diet is the most common response following a “successful” diet. This is caused by a compensatory slowing of the metabolism and an increase in hunger during the diet that can persist after the initial weight loss. The progressive slowing of metabolism occurs no matter how the weight loss was produced–traditional calorie restricted diets, low carb, high or low fat foods, medication, and even gastric bypass. It occurs with or without exercise and in the face of maintaining limited calories after the initial dietary period. A recent report showed that 1/3 or more of the “Biggest Losers” on NBC-TV regained their weight.

Summary of Causes of Weight Loss Plateaus and What You Can Do About It: 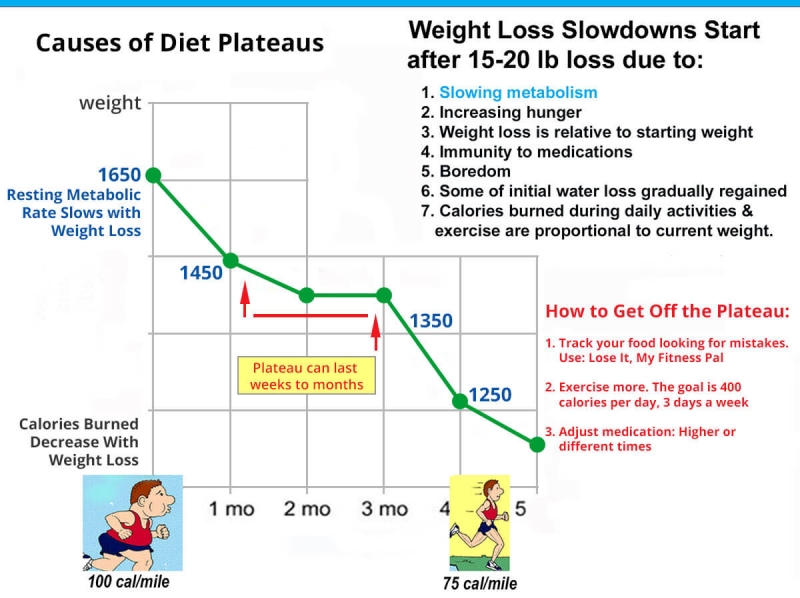