Veggie carbs made from vegetables such as cauliflower, zucchini and  lentils are low carb alternatives for overweight individuals and diabetics who eat  eat rice, pasta and potatoes daily.  Rice, pasta and potatoes are the the “major carbs” as opposed to bread, fruits, cookies, and chips which are termed  “minor carbs.” All have few nutrients, high calories, and high carbs with almost impossible portion control.  Quickly broken down into simple sugar in the stomach, these carbs raise blood sugar, are converted to fat, and produce hunger. Some of this sugar is utilized by the body to fuel activities such as walking and exercise, while other provide energy for digestion and breathing.. When the  carb ingestion exceeds the bodies need, the excess sugar is converted into fat.

Reducing these carbs will lower your sugar cravings and help you feel “normal” about food. Many people feel more energetic and active by consuming fewer carbs. They also tend to be more productive as they lose the extra weight. Green Giant and Birdseye sell various cauliflower and zucchini alternatives to rice and pasta. All have less than 25 calories per cup. Many low carb diet plans rely on these products, including Dr Lipman’s Keto and 800 calorie HCG diet.

Weight loss through reduction in fat storage is only one of the reasons to reduce these carbs. Here are some risks associated with eating these major carbs:

Are Carb Cravings an Addiction?

Whether carbs like rice, pasta and potatoes are actually an addiction is controversial. Some scientific evidence in rodent testing, as well as brains of people who are already obese, suggest they are. Pure sugar is probably more closely related to addiction. For many people eating these foods causes pleasure, calmness, hunger and the desire for more and more. The problem is that they all turn to pure sugar in the stomach. They are rapidly absorbed into the blood stream. If not used for metabolism immediately, the sugar rapidly turns to fat and produces more hunger and the need for more and more. Read more about Carbs and Health from American Diabetes Association.

CAULIFLOWER, ZUCCHINI, SPINACH, AND SHIRATAKI NOODLES TO THE RESCUE 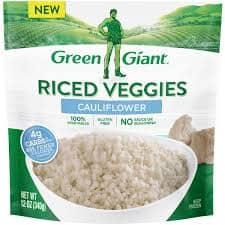 Understanding the danger of eating the major carbs – rice, pasta and potatoes – on a daily basis or even 3-4 times a week, manufacturers have produced many alternatives. Green Giant and Birdseye have lead the pack with many low calorie products. Compare the new products that have 25 calories/cup with 1-3 net carbs with rice or pasta that has 240 carbs and 45-50 net carbs, respectively! The cauliflower based products are the lowest at 25 calories per cup. The fresh zucchini products are not much more. The frozen zucchini and spinach based products are about 110 calories/cup with about 16 net carbs. These are still less than 1/2 of the originals. Here are some of the choices from the frozen vegetable section of Publix in Florida. There are 5-8 more variants of these products. 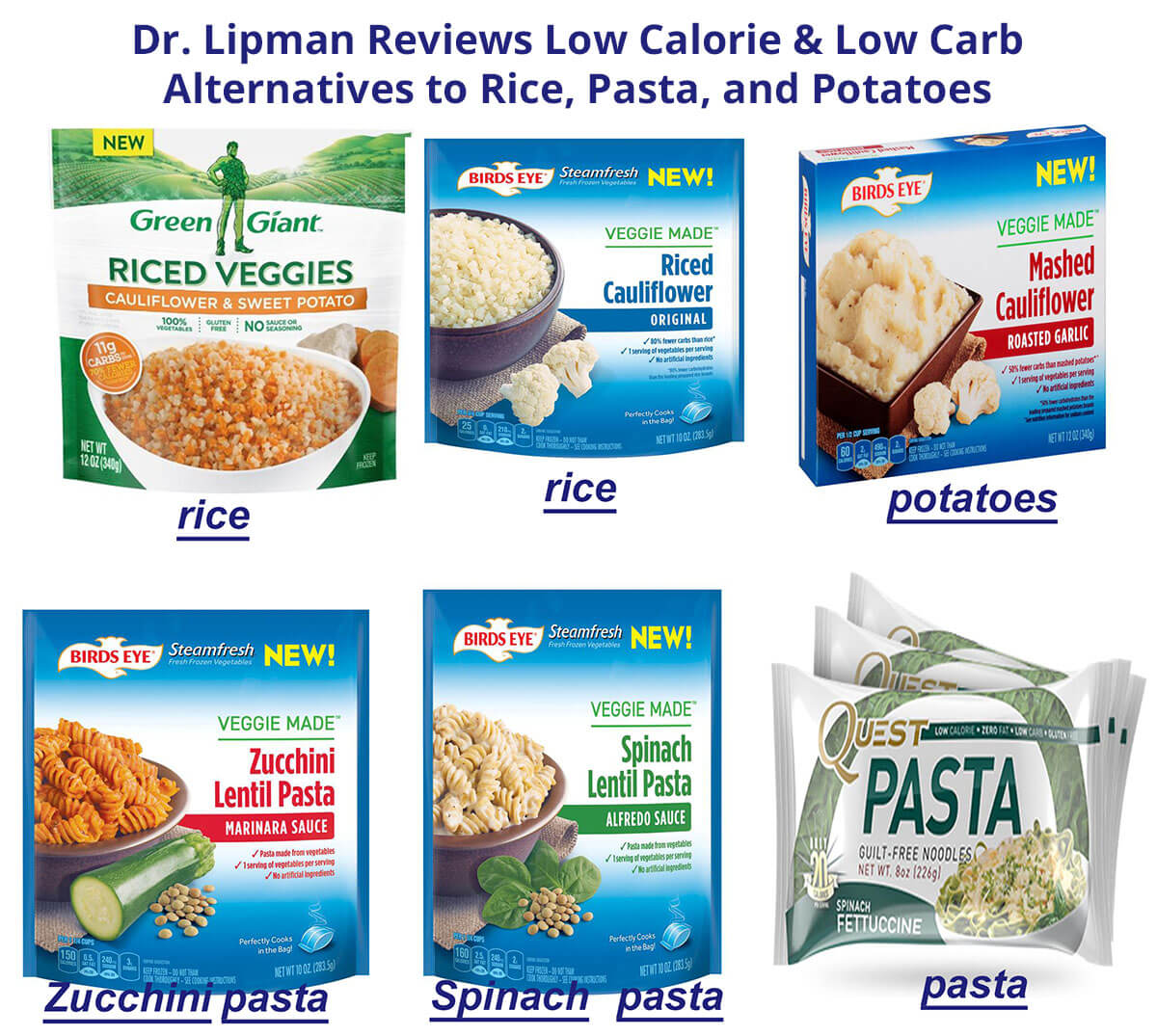 Shirataki or Miracle Noodles: No Calorie-No Carb Noodles from Japan
Ideal for the Keto Diet. 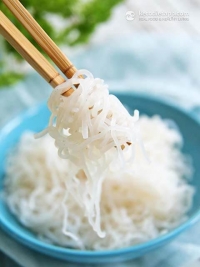 Shirataki or Miracle noodles are thin, translucent, jelly like noodles from Japan that are derived from the konjac yam (devil’s tongue yam or elephant yam). “Shirataki” means “white waterfall”, which is how the noodles appear. They are made up of water and glucomannan, which is a fiber that is very low in calories and carbs. They have little taste of their own and tend to pick up the taste of surrounding flavors and foods. They are packaged moist, so they can have a slight bitter or fishy taste. Therefore, they need thorough draining and rinsing before cooking. Here is the typical nutritional information:

“Shirataki noodles are almost zero calorie and zero carb. They are 97% water, 3% fiber and traces of protein, fat and calcium. There are 4 kcal and ~1 gram of net carbs per 100 g / 3.5 oz of shirataki noodles. If you find that the packaging says “zero” calories or “zero carbs”, etc. it’s because the FDA allowed products with less than 5 calories / less than 1 gram of carbs, protein, and fat to be labeled as zero.”

How to cook Shirataki noodles 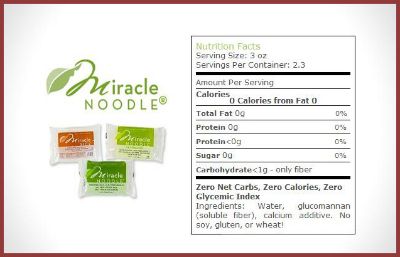 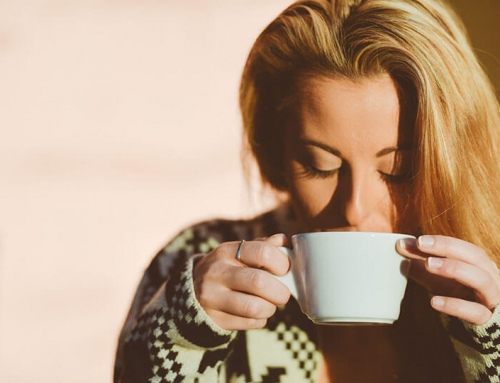 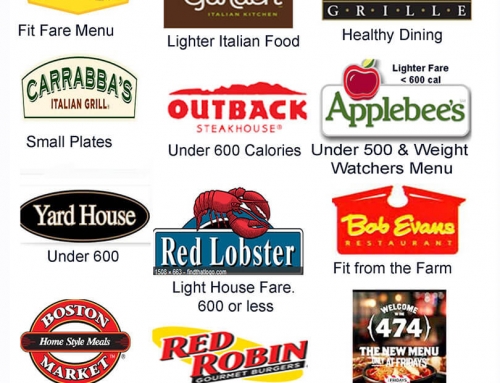 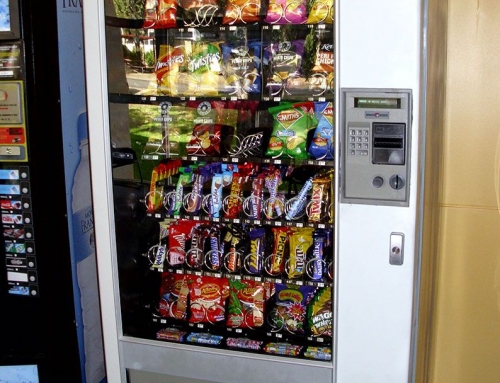 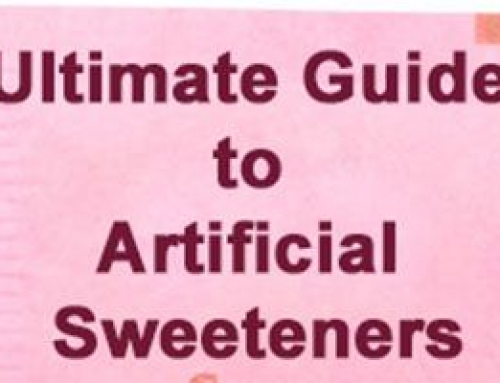