Compound Semaglutides in Miami: Which is Best for You?

Products are not for sale,except to Dr Lipman’s Florida Patients

Which is the Best Compounded Semaglutide for You- from Dr Lipman, Endocrinologist-Miami, Fl

Semaglutide isn’t a new drug but rather a repurposed one. I have used it to treat diabetic patients in my office in Miami since 2017.It’s the same active ingredient, marketed as Ozempic  with the same weight loss and effect on blood sugar. Using the drug as a once-weekly injection designed to lower blood sugar in 2010 lead to the observation of significant weight loss in diabetes that historically have been a group of individuals with  great difficulty losing weight. When the maximal dose of Ozempic was increased by the FDA  from 1 mg/week injection to 2.0 and 2.4 mg the weight loss exploded from 10-12% of starting weight up to 17 to 20% of the initial weight. As an example, a person weighing 200 lb could lose  40 lbs in less than 3-4 months!   I have seen this amount of weight loss in only 3 months in many people. Many individuals weighing 200 to 250 lb’s can lose 12 to 15 lbs a month. This is not just a one time event, but month after month. Often the weight loss is so significant, the patient needs to take vitamin and mineral replacements similar to patients undergoing gastric bypass weight loss.

After testing in thousands of diabetic and non-diabetic individuals, the Danish pharmaceutical  company Novo Nordisk obtained FDA approval to sell the higher dose as Wegovy.   This became very popular and by early 2022 supplies became scarce.  Limited supplies of the higher doses of Wegovy have been available through all of 2022.

The patients that I have treated, especially when adding a especially designed low carb diet have continued to lose large amounts of weight through the year. Side effects with Wegovy seem  to markedly decreased as time passed so that by the time the patient reached the higher doses of 2 mg/week there we’re few complaints. The early side effects of nausea seen with Wegovy we’re replaced by fatigue and weakness. This has been due to both skipping meals and the drug alone. As in any weight loss plan Semaglutide slow downs and plateaus have been observed, but much less often than observed in more traditional weight loss plans. 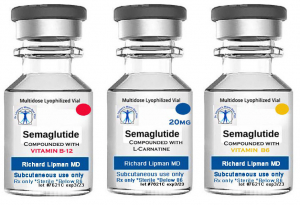 Ozempic, Wegovy and Mounjaro are new medications sold only by their brand names and are very expensive with discounted prices ranging from $850 per month for Ozempic to $1000/month for Mounjaro. This  has led to  generic semaglutide equivalents. These drugs are identical (weight loss, blood sugar control) to Ozempic-Wegovy and Mounjaro except for the addition of minor components such as Vitamin B6, Vitamin B 12 or L-Carnitine.    Since these are generic medications the monthly price is reduced from $1200 to $400 per month depending on the manufacturer, dose and preparation. There are many sources of Semaglutides  available in almost every large city in the US today. Here is the six most common Semaglutide preparations we have used in our Miami offices:

Compound Semaglutide with pyridoxine (Vitamin B6)
Compound Semaglutide with vitamin B6 offers many advantages to the brand semaglutide -Ozempic and Wegovy.. This is a combination of our semaglutide with vitamin B6. B6 is a generic name for three similar compounds: pyridoxamine, pyridoxal, and pyridoxine. These three compounds convert to “co-Factor,” which assist in enzyme reactions throughout the body that are essential for cell behavior and function. The body can’t produce B6 on it’s own, so you must get it either from foods or supplements. In this compounded semaglutide,   vitamin B6 is added to burn calories more efficiently, stimulate the thyroid and cut water retention. When caloric intake is limited as on this weight loss diet, Vitamin B 6 helps in the conversion of complex carbohydrates to glucose. In addition, B6 is essential for healthy fat metabolism and energy production. Lipid metabolism depends on B6 for the proper conversion of protein and carbohydrates into fat, and the healthy metabolism of essential fatty acids. In addition, NIH research suggests that vitamin B6  effective in reducing BMI and improving body composition and biochemical factors associated with obesity.

Compound Semaglutide with L-Carnitine
Carnitine is added to the Semaglutide preparation to increase it’s weight-loss properties. Naturally, Carnitine is a critical amino acid in the role of energy production. It is found in nearly all the cells of the body, burning fatty acids to boost metabolism and produce energy. Together, the Semaglutides and Carnitine become potent and effective fat burners. I have treated 55 obese patients with this preparation and have seen weight loss similar to that observed with Qsymia and Wegovy. Interestingly, GI side effects seem  less severe. When comparing Semaglutide preparations there  was  a little greater weight loss in those taking the L-carnitine version of semaglutide  as compared to ethe vitamin b 12 versions.

Compound Semaglutide with NAD+
Compounding semaglutide pharmacies have combined Semaglutide with NAD+. NAD+ stands for nicotinamide adenine dinucleotide. NAD+ assists in converting food to energy and also plays a role in maintaining DNA integrity while enduring proper cell function to protect our bodies from aging and disease. It has also been used to aging, and improve cognitive function and immune health. No weight loss studies have been reported with this combination.

Compound Tirzepatide (Mounjaro)
This is the newest of the compound preparation of Tirzepatide(Mounjaro) containing both GLP-1 and GIP peptides are combined with Vitamin B 12 to produce the generic version of the Mounjaro. Some reports suggest less GI side effects with this preparation. Efficacy seems similar to the brand version which is somewhat greater than the Semaglutide preparations of Wegovy and Ozempic  that only contain the single peptide-GLP-1.

Semaglutide Doctors Experience: Which is the Best of the Semaglutides: Weight Loss vs. Side Effects vs. Cost

Semaglutide doctor’s experience is very limited due to the  limited availability and short experience with these medications. This makes it difficult to pick the Semaglutide preparation that offers the greatest weight loss with the least side effects at the most affordable price. On needs to be careful when comparing the brand semaglutides-Ozempic, Wegovy and Mounjaro against their compounded versions because most retail advertisers  offer very low doses to keep  the advertised starting prices as low as possible. The brand semaglutides are prescribed in self injecting pens which vary in dose by a factor of  some times as much as 10. However, even the highest doses of the brand pens cost the same as the lowest doses.  An example is Ozempic  and Wegovy where the lowest starting dose of 0.25 mg/week  costs  the same as the highest weekly dose of 2.4 mg/week. When using the compounded versions the costs are based on the mg/week with the highest doses often 5 to 10 times higher than the lower starting doses.

The compounded version of Tirzepatide follows the brand version in that it has greater weight loss than the  Semaglutide versions of Ozempic. This follows the experience with the brand and is due probably due to the fact that Tirzepatide has both GLP-1 and GIP agonists. Those preparations containing only GLP-1 seem to have equal weight loss, with  a slightly greater weight loss with the L-carnitine version. When comparing semaglutide weight loss between brand and compounded version of the same medication and same dosage, I have found very little differences in weight loss and side effects.  However, many of the compound semaglutides featured online use very low doses to keep the cost down.

Certainly, the Vitamin B12 and L Carnitine versions seem the most popular with most doctors who prescribe compounded Semaglutides. Here is what to consider when you are attempting to make the best choice:

There is little obvious  difference in the price  between the  compound versions of Semaglutides. The compounded version of Tirzepatide  is much more expensive than the compounded versions of Wegovy or Ozempic. All of the compounded  semaglutides, including  Tirzepatide(Mounjaro) are purchased in bulk and sold by the milligram, as opposed to the pens where the price of all of the pens are the same, regardless of dose. It’s often difficult to estimate the price of some of the compound semaglutides as they sold by many clinic and physicians where the advertised price is usually the lowest starting dose and this  often includes a monthly telemedicine visit with a health care provider.  It is difficult and sometimes impossible to find the costs of the higher doses that are often needed from online retailers.

More important is the get the medication from a trusted source. Most individuals will be taking the medications for months, so reliability and price are important. This is very important when titrating the doses upward as is usually done to achieve  maximal weight loss.