Artificially Sweetened Beverages (ASBs) have been available for more than 50 years and have been consumed by billions of individuals. Despite the long history of consumption there has been unending controversy not only about the safety but the usefulness of ASBs. Are they safe? Are they desirable in a weight loss and maintenance plan? The answers are IN–they are not only safe BUT drinking diet beverages help people lose weight.

The newest artificial sweetener, Stevia is derived from a South American Tree. Natives have used it for 100’s of years. If you buy it pure, often in
liquid form you end up with a pure, natural sweetener that should please all of the anti-sweetener people. Read more about Stevia.

There is no question artificial sweeteners are safe in beverages and foods. Multiple university studies in the US and across the world show no health problems from short or long term use. Both the FDA and the European Food Safety Authority have confirmed the safety of aspartame and sucralose. Thousands of websites around the world condemn artificial sweeteners claiming they cause cancer, headaches, depression, cellulite, multiple sclerosis, mood changes and many more adverse health effects–all without any controlled studies. 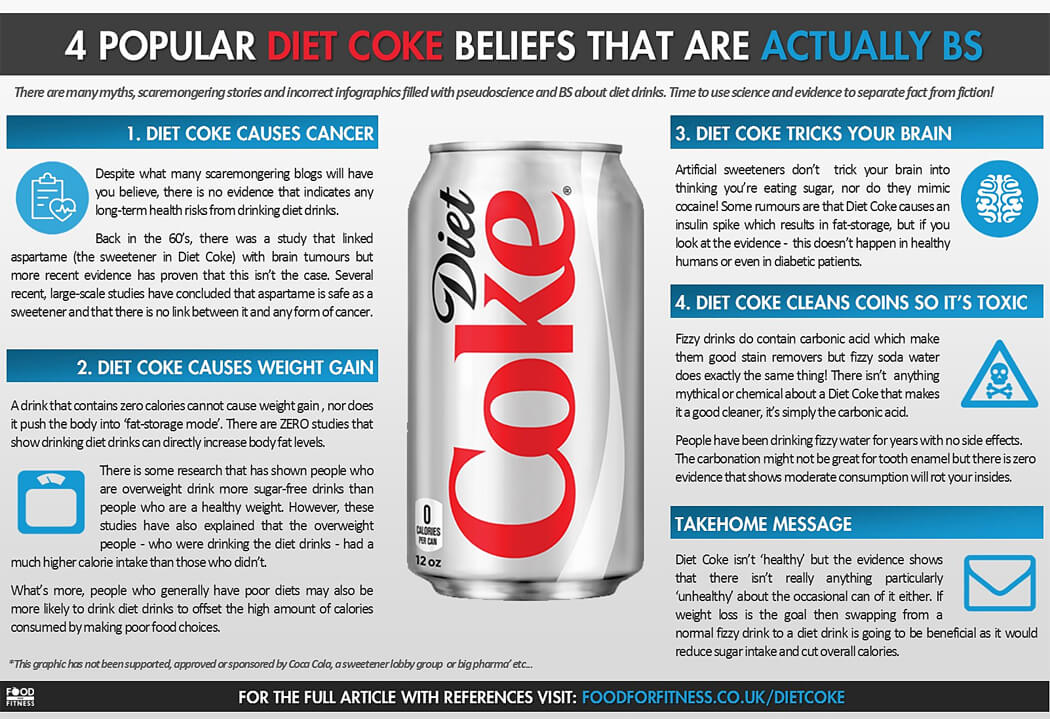 Aspartame is the most studied food ingredient around the world. It has been the subject of more than 1200 studies, each consisting of thousands of people, over the past 30 years. The safety of these food additives have been confirmed by regulatory agencies in hundreds of countries. They all point out that rats (the standard lab animal) are not humans (obviously). The results of feeding sky high amounts of artificial sweeteners to lab rats cannot be transferred across species to humans.

President Teddy Roosevelt, when asked by a reporter how he was able to lose 40 lbs said, “anyone who says saccharin (the first artificial sweetener discovered in 1879) is injurious to health is an idiot, Dr, Riley (Roosevelt’s personal physician) gives it to me every day.” This was Teddy Roosevelt, not Franklin D. Roosevelt, and the year was 1908! (See the FDA’s position here: http://www.cancer.gov/cancertopics/factsheet/Risk/artificial-sweeteners.)

The ASB controversy has been going on for more than 106 years and it looks like experts on each side will never agree. What are you do? Each dieter has to make his or her own decision whether to use artificially sweetened foods and especially beverages. The decision should be based on the best medical evidence they can find. The best evidence is found in peer reviewed scientific papers written by M.D..’s or PhD’s and published in widely accepted medical journals. These authors should have an appointment in a university medical school that you recognize. If you’ve never heard of the university or the author has no such degree, you had better be careful what you accept as true. See the following university and medical research:

Given the increasing incidence of obesity here and across the world it becomes important to understand whether drinking ASBs is a benefit or a hindrance to people actively seeking to manage their weight. Water has been deemed the best choice for weight loss and maintenance. Is water really better than artificially sweetened beverages or do they assist in weight loss?

The early studies on beverages with artificial sweeteners are from 1984 thru 2000, and show that dieters drinking ASBs had more sugar cravings. This has been attributed to reverse causality as previously noted. The CHOICE study reported from the Gillings School of Global Public Health at the University of North Carolina in 2012 showed that among 312 subjects those drinking ASBs had a greater chance of losing more than 5% of their body weight than those drinking water.

The most recent study published in June 2014 from Temple University and the University of Colorado followed 303 overweight subjects (BMI from 27 to 40) over 12 months. This was published in the June 2014 issue of Obesity, the journal of the Obesity Society. They found 44% more weight loss in the group drinking artificially sweetened beverages as compared to those drinking water. Again there was no preference for sweet foods or drinks in ASB drinkers.

Here are the Conclusions You Can Draw From These Studies:

There are no reasons that a dieter on the Miami Diet Plan or the 800 Calorie HCG Diet Plan is restricted to water or stevia-sweetened beverages alone. Any artificially sweetened food or drinks are acceptable in all phases of the diet.